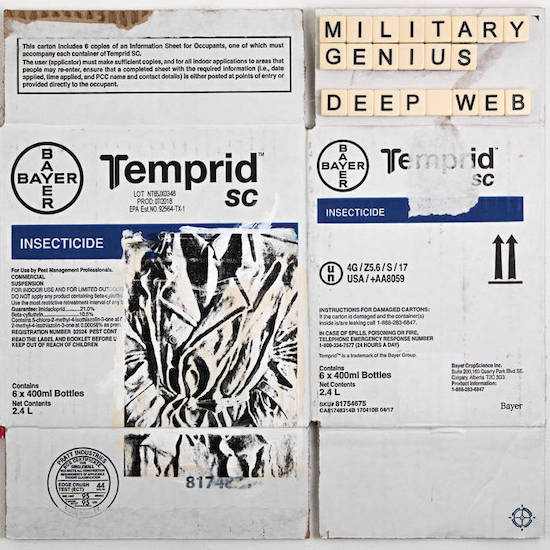 Bryce Cloghesy from the tremendous Crack Cloud has made a record, Deep Web, under the name Military Genius. It’s a fascinating release that, despite being an enjoyable and often accessible listen, never really gives away too much of what makes it tick.

Deep Web also has the happy knack of sounding like everything I like all at once whilst having a distinct character of its own. One minute we dive into the soundscapes Barry Adamson conjured up on Oedipus Schmoedipus. Other moments nod to Suicide, such as ‘When I Close My Eyes’, which employs a number of Alan Vega’s vocalisms. (Though the track could also be a lost b-side by Section 25.) I’m reminded of Bunnyman Will Sergeant’s solo outings like Themes From Grind or Via Luonge too, with tracks like the splendid ‘The Runner’, a pulsating electronic workout. I was even reminded of AR Kane’s existential cool at times, specifically with the ghostly vox and keys on the track ‘Reflex’. None of this is a bad thing at all.

Apparently recorded on the road and between various other band commitments, Deep Web gives the sense of being slaved over in secret, of being remorselessly thought through whilst no-one else was looking. It is certainly a skillfully made record. The knack of knowing when to employ which instrument is very noticeable and tiny touches stick in the memory throughout. During the Arthur Russell-esque ‘Focus’, listen out for the squeak as the hand runs up the fretboard around the 3:30 mark. This – coupled with the beguiling melodica part – makes the track a touching, intimate essay. Then there is the glorious sax phrasing that drifts in and out of ‘The Runner’, opening up new moods and providing a balance to the pattering electronic beat. And I may be second guessing Cloghesy’s motives here, but ‘Not Tonight’ is as darkly humorous as a love song can be; its faltering beat and queasy sampling (a strange cross between an accordion and the springs on an old bed) does give the impression “someone” is going to throw up at any moment.

There is a common idea that creating a “private” record allows a greater intimacy between an artist and their listeners. Yet with Deep Web, Bryce Cloghesy seems to enjoy teasing his audience from the off. The opener and title track drifts into view and – like some dust-caked caravan in the desert – glides past, without us really grasping what we’ve been party to. The sense of being slightly disoriented is strong with this track. The clashing rhythms and instrumentation are maybe there as a little joke at our expense, as the melody line reveals itself to be simple enough. Further confusion ensues when the lyrics are examined; as those messages that can be deciphered seem vague or double-edged. The lugubrious ‘Not Tonight’ has the line, “I’ll be by your side / But not tonight”, which is as non-committal as you can get. And ‘Focus’ teases us further. The repeated phrase “don’t you feel…” is followed by a number of indecipherable lines that dissolve into the mist. It’s like Vini Reilly’s tribute to Ian Curtis on LC, but there you could hear what Vini was saying. Even when things seem to open up and threaten to get fruity, there is alway a feeling of remove that muscles in. The appropriately named ‘Let My Guard Down’ reveals itself to be a lovely track by its end, balancing a sunny mood full of squiggles and squeals. But I’m still none the wiser as to the subject matter. And the “you” in ‘When I Close My Eyes’ will only ever be known to Cloghesy and the subject of his dreams.

Still, ‘Born Blind’, the most stripped back and “open” of all the tracks maybe offers some insight. Cloghesy sings, “You don’t what is coming ‘til it comes” and then the track is enveloped by the sound of the waves on the beach. Well, quite. I hope he makes another record soon.