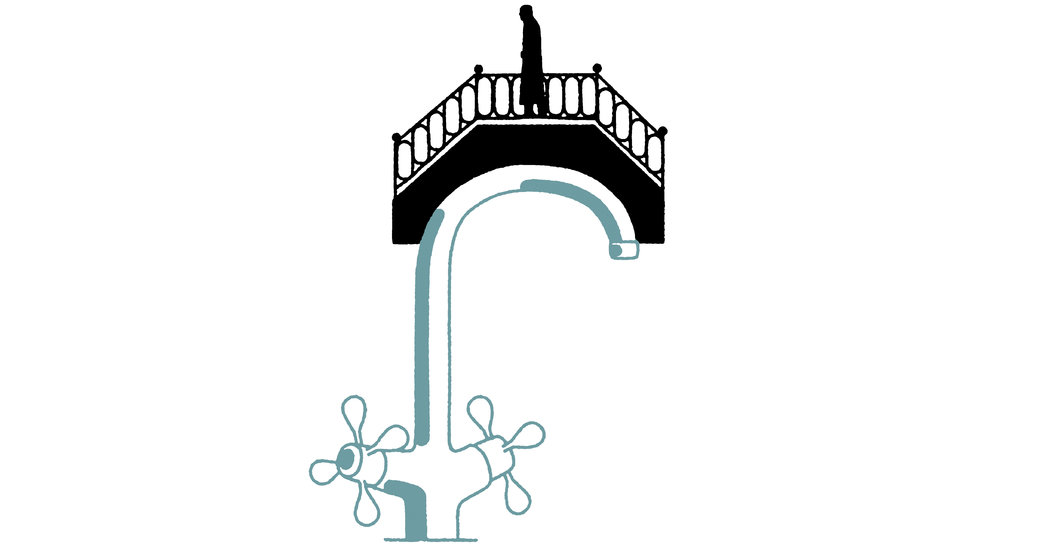 Guido Brunetti, the compassionate police commissario in Donna Leon’s new Venetian mystery, TRACE ELEMENTS (Atlantic Monthly Press, 278 pp., $27), always turns to the classics to help him with his tangled thoughts about justice, a concept that, when examined, always seems to him like vengeance. But he gets no help from those avenging furies who always show up in the Greek plays he reads. “We are fierce and cannot be deviated by man,” the Eumenides remind him. The forgiveness that comes naturally to Brunetti will only lead to “moral chaos,” they warn.

But Brunetti can’t help himself. Here, his sympathy is stirred by Benedetta Toso, a young widow dying in hospice care who extracts a promise from the commissario to investigate the death of her husband and the origin of the “bad money” that led to his fatal motorcycle accident — if that’s what it was. It becomes a complex case concerning water; not the canal waters into which Venice is inexorably sinking, but the city’s own precious water supply.

As a native son in a sunbaked culture where a shot of espresso serves as a blood transfusion, Brunetti is constantly dropping into sidewalk cafes for a quick jolt to keep him alert. Here, when he stops at a local shop to get out of the heat, the shopkeeper offers him a glass of water. “It’s the best thing we have,” the man says. By the end of this story, Brunetti would agree.

The commissario is a dedicated walker, so the street scenes of the city are a constantly changing montage of vivid sights and sounds, from the band of Gypsy girls who apply their pickpocketing skills to the handbag of the mayor’s own wife to the crowds of plodding tourists on the Rialto. Leon’s characterizations are always a treat, especially those of Brunetti’s colleagues like Signorina Elettra Zorzi, a secretary whose skills at computer hacking are such that people speak of her “as at the invocation of Pallas Athena.” This endlessly enjoyable series, with its deep thoughts about justice and vengeance and charming classical allusions, can’t help making you smile.

Does Kathy Reichs really not know that we relish her Temperance Brennan mysteries because of the gory scenes in the morgue? Guess not, because her latest book, A CONSPIRACY OF BONES (Scribner, 342 pp., $27), rations the forensic anthropologist to a single autopsy. Granted, the case offers “the grisly allure of feral hogs and a faceless corpse,” and the circumstances are juicy enough for Brennan’s mother to ask her, “You working on this corpse got gnawed by hogs?”

Reichs has always been strong on plot, and this one has plenty of twists, as Brennan’s hunt for villains takes her from a dreamy ashram called Sparkling Waters to the darkest pockets of the deep web. Here she finds sinister references to exploited children and secret government experiments. All the same, it’s disheartening to note that before there was an internet, sleuths were forced to hit the road, knock on doors and deal with real people, either alive or — in the life of a forensic anthropologist — more often dead.

You want tough? I’ll give you tough. Donnie Parascandolo is tough. In CITY OF MARGINS (Pegasus Crime, 309 pp., $25.95), William Boyle’s fresh helping of Brooklyn noir, Donnie does “side work” for Tommy “Big Time” Ficalora, a small-time mobster in his Bay Ridge neighborhood. While these side jobs are fairly modest (mostly “collections and whatnot”), he exceeds the limited duties involved in collecting a gambling debt by tossing a deadbeat named Giuseppe Baldini off the Marine Parkway Bridge and into Rockaway Inlet. And did I mention that Donnie is a cop?

Donnie has no problems being corrupt — after all, most of the other cops he knows are crooked, too: “They’re bad a million ways. They betray any ethics they once had. It’s the culture.” Boyle studies Donnie and his neighbors with a mixture of affection and despair worthy of a Bruce Springsteen song. He has a real thing for working-class folks like Ava Bifulco and Rosemarie Baldini, who work at the same nursing home, and Rosemarie’s son, Mikey, whose whole life changes when he reads a note in a library book. People like this, they need people like Boyle.

Despite its pretty name, the backcountry hamlet of Wild Thyme where Tom Bouman has set THE BRAMBLE AND THE ROSE (Norton, 208 pp., $25.95) is no pastoral paradise. Hard drugs like heroin and fentanyl have found their way to this rural Pennsylvania township, as have the surly survivalist groups pitched in the deep woods. But civilization and its refinements have gained a foothold; tobacco chewers are spitting their chaw juices into upmarket iced tea bottles and farmers are raising llamas. So it seems as if some repressed primal urges have been unleashed when a headless and gutless body is found in the woods. Officer Henry Farrell, Bouman’s introspective lawman, is our moral lifeline in these rustic mysteries, which makes it jarring (and not at all believable) when he becomes the prime suspect in another murder and goes on the run. Plot gaffes aside, this is one of those elegiac regional novels that make you want to pull up stakes and move to the country.