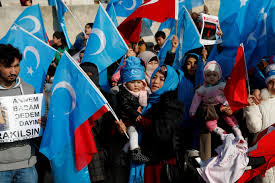 Hackers working for the Chinese government are said to have
been tracking the movements of ethnic Uighurs, a mostly Muslim minority, which
is viewed as a security threat by Beijing. The hacks are a part of a rather
extensive cyber-espionage campaign focused on “high-value individuals” such as
diplomats and foreign military personnel, the sources said.
As a part of the campaign, various groups of Chinese hackers
have compromised telecoms operators in nations including Turkey, Kazakhstan,
India, Thailand and Malaysia, the four sources said.
China is currently confronting growing international
criticism over its treatment of Uighurs in Xinjiang , as the members from the
group have been subject to mass confinements in what China calls  “vocational training”  centres as well as ‘widespread state
surveillance’.
The nation has more than once denied association in any
cyber-attacks or any abuse of the Uighur people, whose religious and cultural
rights Beijing says are completely ensured, and the Chinese Foreign Ministry
said any hacking charges should be upheld by legitimate proof.
“We would again like to stress that China is a resolute
safeguarder of internet security. We consistently and resolutely oppose and
crack down on any forms of internet attacks,” a ministry statement said.
While government authorities in India and Thailand declined
to remark in regards to the specific telecoms operators that were undermined,
officials in Malaysia, Kazakhstan and Turkey refused to promptly react to the
requests for comments.