A Utah man has been convicted of running a multimillion-dollar opioid ring out of his basement by creating counterfeit prescription painkillers laced with fentanyl and mailing them to homes across the United States.

Aaron Michael Shamo, 29, of Cottonwood Heights, was found guilty on Friday of 12 federal charges including one count for leading a ‘continuing criminal enterprise’, which carries a mandatory life sentence.

Prosecutors said Shamo, a former Eagle Scout, and a small group of fellow millennials produced thousands of pills containing fentanyl in the basement of the 29-year-old’s suburban home in Salt Lake City and sold them on the dark web to customers across all 50 states.

In a 13-count indictment, prosecutors alleged that dozens of the ring’s customers died in overdoses, though Shamo was only charged in connection to one: a 21-year-old identified as R.K., who died in June 2016 after snorting fentanyl allegedly passed off as prescription oxycodone.

The jury was hung on that charge, so Shamo was not convicted of it. 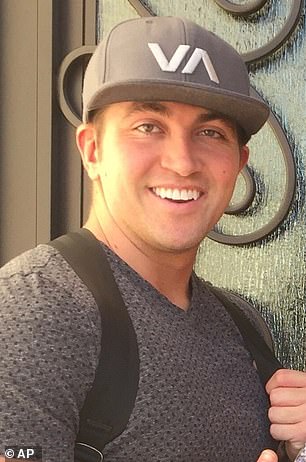 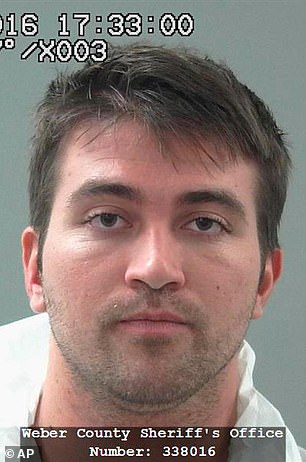 Aaron Shamo, 29, has been convicted of running a multi-million-dollar opioid ring out of his basement by creating counterfeit prescription painkillers laced with fentanyl and mailing them to homes across the United States. A federal jury handed down the guilty verdict on 12 charges on Friday in Salt Lake City, Utah 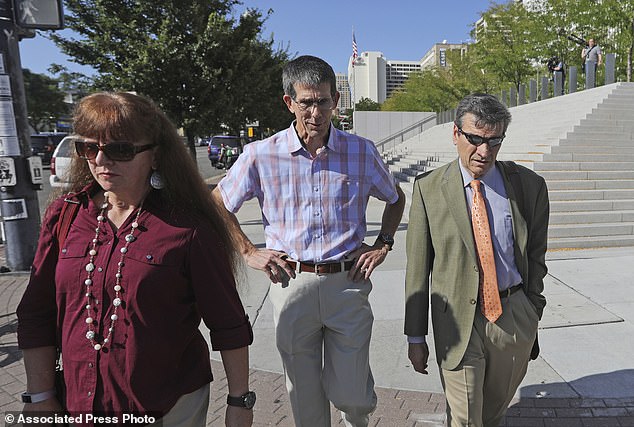 The defendant’s parents, Becky and Mike Shamo (left and center), are seen outside the federal courthouse in Salt Lake City with defense attorney Greg Skordas (right) after the guilty verdict was handed down 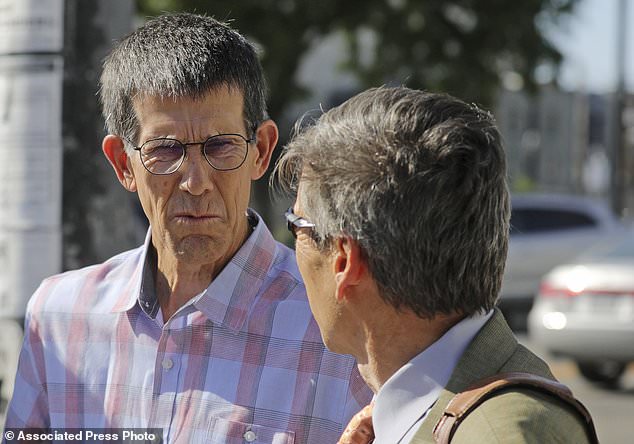 Ahead of the trial, Shamo’s family said he’d been singled out even as deeply involved friends are offered more lenient plea deals. ‘We just want equity. We want equality for everyone in this, so those that were equally guilty are held accountable for their actions,’ Mike Shamo (left) said

The federal government’s case offered a glimpse at how the drug, a potent synthetic opioid that has exacerbated the country’s overdose epidemic in recent years, killing tens of thousands of Americans, can be imported from China, pressed into fake pills and sold through online black markets.

During the trial prosecutors painted Shamo as a ruthless drug dealer who gambled heavily, partied on boats and paid for table service at concerts with the money he earned from customers he knew were sickened by the knock-off prescription pills he peddled.

The defense attempted to evade the possible life sentence by arguing that Shamo was not savvy enough to have been the ringleader of the operation.

They noted that he purchased a pill press machine, packaging items and other supplies in his own name without trying to cover it up, and criticized the plea deals other members of the group received to avoid time behind bars.

After the 12-count conviction was handed down, Utah Attorney General Sean Reyes released a statement praising the outcome.

‘Shamo’s conviction today is a significant victory in the ongoing war on illegal opioids in our state and nation,’ Reyes said.

‘Utahns owe a debt of gratitude to all involved in taking down this predator.’

Shamo’s defense attorney Greg Skordas condemned the ruling, saying: ‘He’s going to die in prison. That was the government’s goal. And they reached it.’

Skordas said of his client: ‘He’s just a kid, and to think that he will never have another meal with his family, never go on a date, never watch his child be born. Ever. He’s 29 years old. And his life is over.’

The mother of a New York man, Gavin Keblish, who died after he had surgery and bought the pills from Shamo’s operation attended the trial and said the verdict was bittersweet.

‘There’s never any closure, ever,’ Tova Keblish said. ‘It’s going to be something that’s part of our lives every day.’ 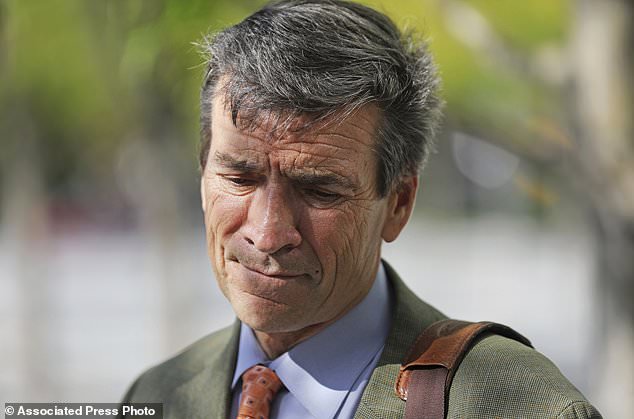 Shamo’s defense attorney Greg Skordas (pictured) condemned the ruling, saying: ‘He’s going to die in prison. That was the government’s goal. And they reached it’ 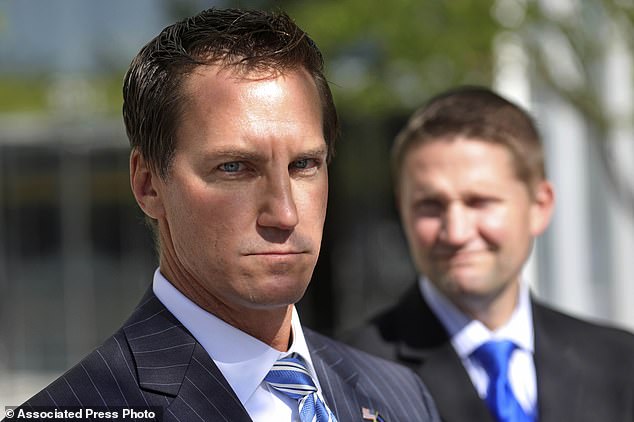 During the trial prosecutors painted Shamo as a ruthless drug dealer who profited off of the suffering of his customers. Assistant US attorney Vernon Stejskal (left) is seen outside the court on Friday after the jury returned guilty verdicts on 12 of the 13 counts against Shamo 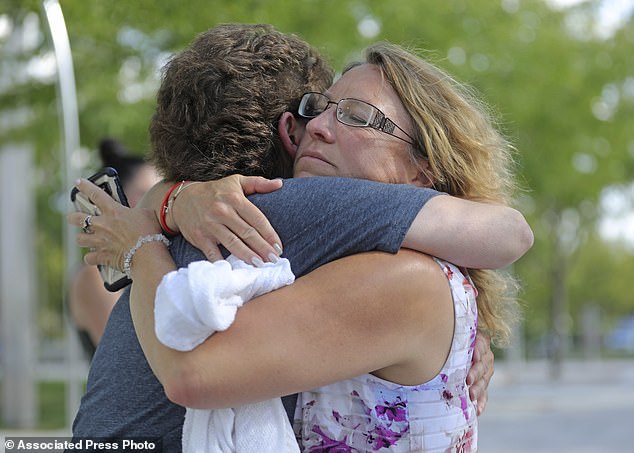 Tova Keblish, whose son Gavin died after he bought the pills from Shamo’s operation flew in from New York for the trial. She is seen hugging a friend after the verdict was announced 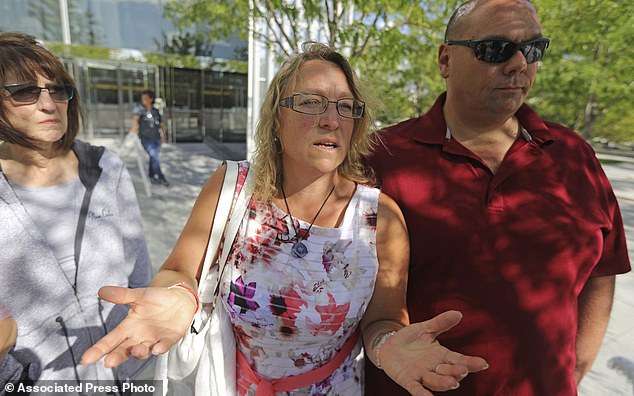 Keblish (center) told AP that the verdict was emotional for her because ‘there’s never any closure, ever. It’s going to be something that’s part of our lives every day’

Ahead of the trial Shamo’s family said he’s been singled out even as deeply involved friends are offered more lenient plea deals.

His father, Mike Shamo, said his son was a chess whiz as a kid who experimented with marijuana in his teen years, but later earned his Eagle Scout badge crocheting blankets for a hospital.

Aaron Shamo became an internet-savvy aspiring entrepreneur and health-conscious workout buff who loved self-improvement books like ‘The Secret’ and had dreams of starting his own tech-support business, Mike Shamo told The Associated Press. 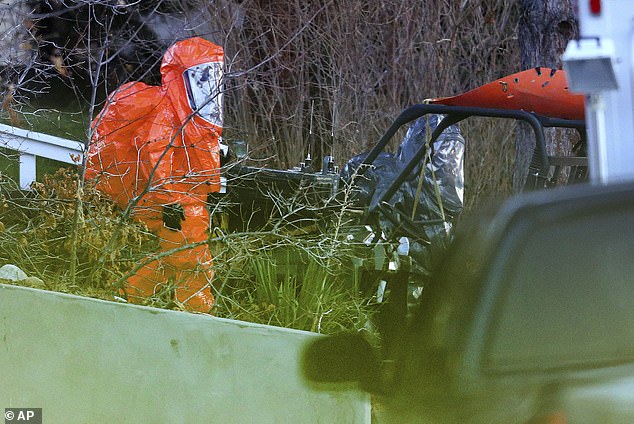 Agents raided Shamo’s home in the upscale surburb of Cottonwood Heights in 2016 and found a still-running pill press in the basement, thousands of pills and over $1million in cash 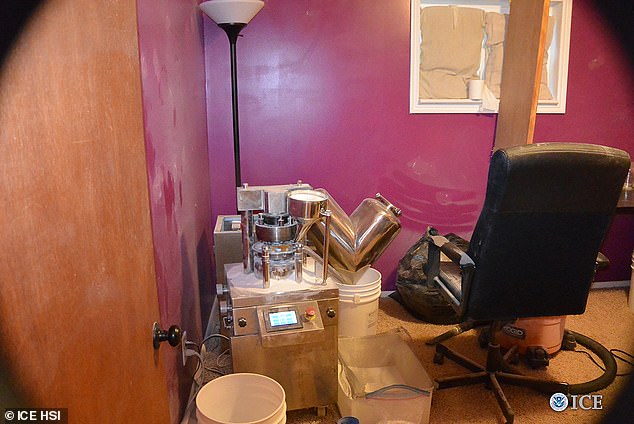 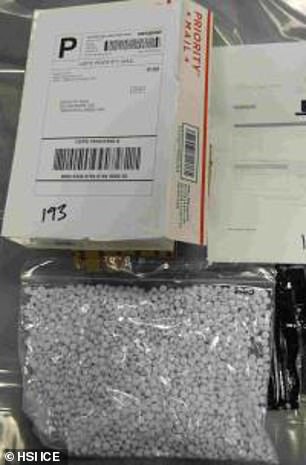 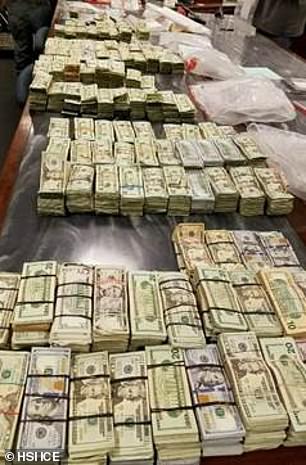 One of the pill shipments intercepted by federal authorities is shown left. One box alone had a wholesale value estimated at more than $400,000, according to court documents. Investigators found trash bags filled with cash inside Shamo’s basement (right)

‘He was brought in and saw the opportunity for making money, and he didn’t truly understand the danger behind what he was doing, how dangerous the drugs were,’ he said.

‘I think he was able to separate what he was doing because he never saw the customer. To him, it was just numbers on a screen.’

At the time of Aaron Shamo’s 2016 arrest, authorities said the bust ranked among the largest in the country.

In a raid on his home in the upscale suburb of Cottonwood Heights, agents found a still-running pill press in the basement, thousands of pills and more than $1million in cash stuffed in garbage bags, according to court documents.

The group had started two years before, and grew to include more than a dozen people, some of whom Aaron Shamo met working at an eBay call center, court documents allege.

Prosecutors said it started with a partnership between Aaron Shamo and Drew Crandall, a shy friend he had bonded with over skateboarding and tips for talking to girls.

The pair eventually began importing and reselling steroids to gym buddies, and the operation grew from there, according to court documents.

Another man, Jonathan ‘Luke’ Paz, has also pleaded guilty to helping develop the recipe and press the fentanyl-laced pills after Crandall left on an extended international trip.

Attorneys for Crandall and Paz did not immediately respond to requests for comment. 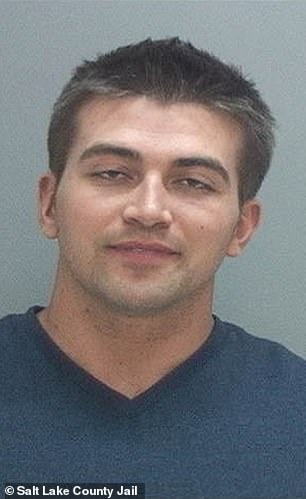 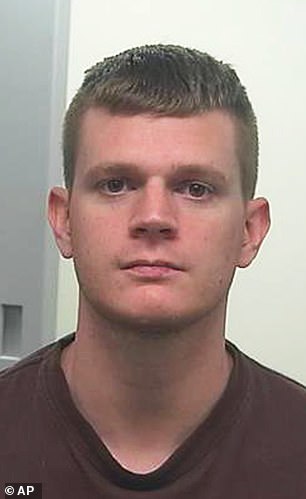 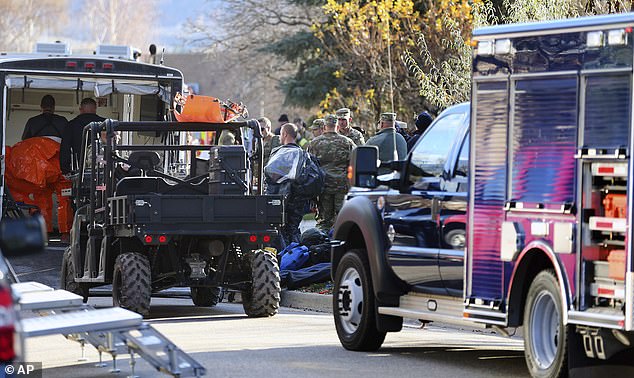 In June 2016, US customs agents seized a package of fentanyl addressed to someone receiving it for Shamo, and things unraveled from there, court documents say. Local and federal law enforcement agents are seen preparing to raid Shamo’s home in November 2016

Aaron Shamo ordered the fentanyl from China and paid a number of people to receive it at their homes and turn it over to him, according to authorities.

He and Paz allegedly cut the powder, added other fillers and pressed it into pills, using dyes and stamps to mimic the appearance of legitimate pharmaceuticals, prosecutors said.

Public health experts warn that such mom-and-pop drug trafficking networks can be especially dangerous: They cut and mix fentanyl – a few flakes of which can be deadly – without sophisticated equipment, meaning in a single batch, one counterfeit pill might contain little fentanyl and another enough to kill instantly.

They were shipping ‘disguised poison,’ prosecutor Michael Gadd said at one hearing.

‘If you think for a moment about what type of people abuse prescription oxycodone, it’s your neighbor, it’s my neighbor. It’s people who had a knee surgery and got hooked.’

What is fentanyl and why is it so dangerous?

Fentanyl was originally developed in Belgium in the 1950s to aid cancer patients with their pain management. Given its extreme potency it has become popular amongst recreational drug users.

Between late 2013 and early 2015, more than 700 deaths were attributed to fentanyl and related substances in Australia. Drug overdoses killed more than 72,000 people in the US in 2017 – a record driven by fentanyl. While around 300 fentanyl deaths have been recorded in England and Wales since 1993.

It is often added to heroin because it creates the same high as the drug, with the effects biologically identical. But it can be up to 50 times more potent than heroin, according to officials in the US.

In America, fentanyl is classified as a schedule II drug – indicating it has a strong potential to be abused and can create psychological and physical dependence.

The pills were sold online, through a dark-web marketplace store called Pharma-Master. The dark web is a second layer of the internet reached by a special browser and often used for illegal activity, but it still has sites with user-friendly interfaces and customer reviews, similar to platforms like Amazon and eBay.

Pharma-Master allegedly grew to become one of the most prominent darknet dealers, sometimes processing 20 to 50 orders a day, according to court documents.

When orders came in, packagers counted pills, sealed them with a vacuum sealer and slipped them into envelopes or boxes addressed to homes across the US, prosecutors said.

They put pills into Mylar bags to mask the contents, wrote fake return addresses like ‘Jamaica Green Coffee,’ and even included phony invoices. The packages were dropped in mailboxes all over the Salt Lake area to hide from police, authorities said.

Some were small orders from people buying for themselves, but in other cases, the group shipped thousands of pills in bulk to gang members and drug dealers who then resold them on the street, prosecutors allege.

Each pill cost less than a penny to make, and could be sold on the street as a legitimate pharmaceutical for $20 or more, prosecutors said.

In June 2016, though, US customs agents seized a package of fentanyl addressed to someone receiving it for Aaron Shamo, and things unraveled from there, according to court documents.

Five months later, investigators had found an incoming shipment from a Chinese company known as ‘Express,’ which is also under investigation.

They also scooped up outgoing shipments: A single day’s worth included 35,000 fentanyl-laced pills in 52 packages addressed to homes in 26 states, prosecutors said.

One box alone had a wholesale value estimated at more than $400,000, according to court documents.

Aaron Shamo’s house was also raided in late 2016, and the following spring Crandall was arrested in Hawaii when he returned from the globe-trotting trip through Australia, New Zealand and southeast Asia to marry his girlfriend.

In the years since his arrest, Aaron Shamo has become something of an advocate for other jail inmates, starting a letter-writing campaign calling on local churches to write to people behind bars to give them hope for life after incarceration, said his father, Mike Shamo. He’s also written to the governor, calling for more rehabilitation programs for jail inmates.

Meanwhile, Paz and Crandall have already agreed to plea deals and could testify against their onetime friend, along with a potential parade of other alleged co-conspirators.

His family promised they would be watching the trial.

‘We just want equity. We want equality for everyone in this, so those that were equally guilty are held accountable for their actions,’ Mike Shamo said. 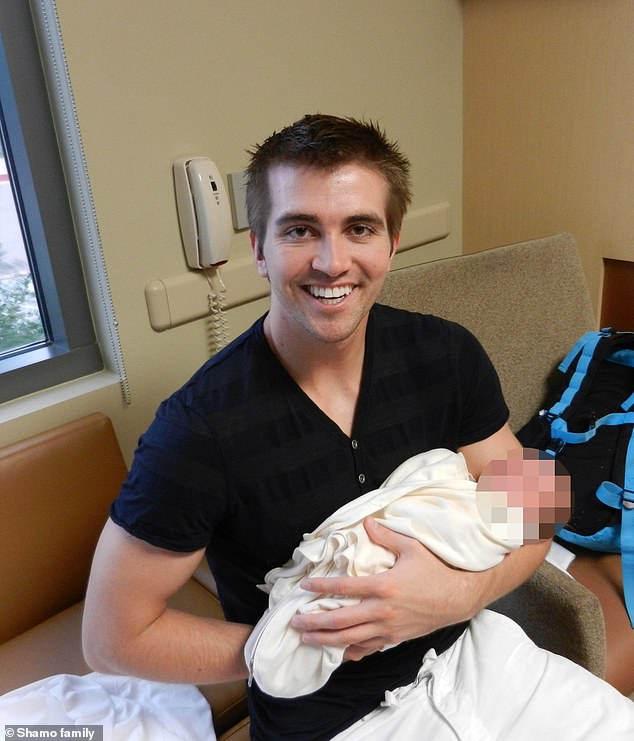 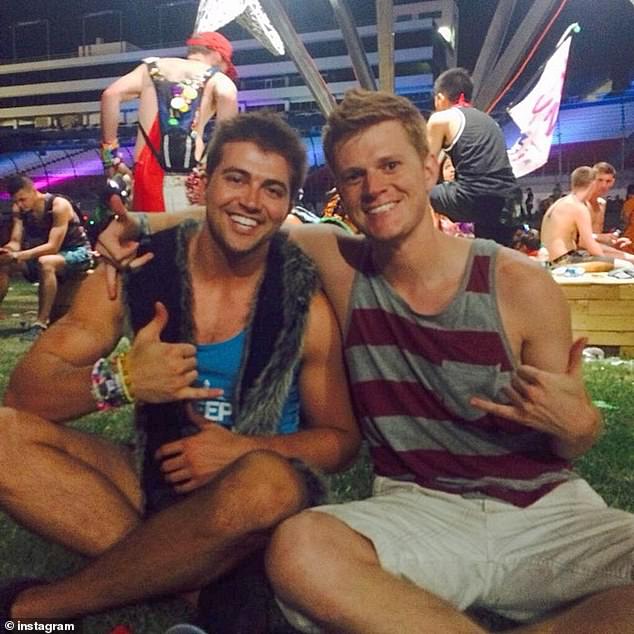 Prosecutors said the scheme started with a partnership between Shamo and Crandall (above together), who had bonded over skateboarding and tips for talking to girls 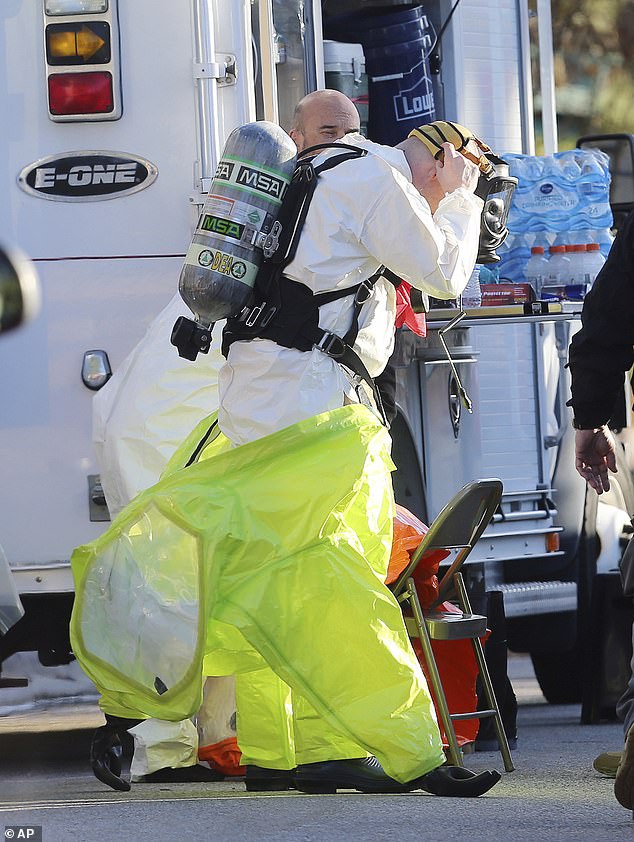 Shipments on a single day included 35,000 fentanyl-laced pills in 52 packages addressed to homes in 26 states, according to court documents