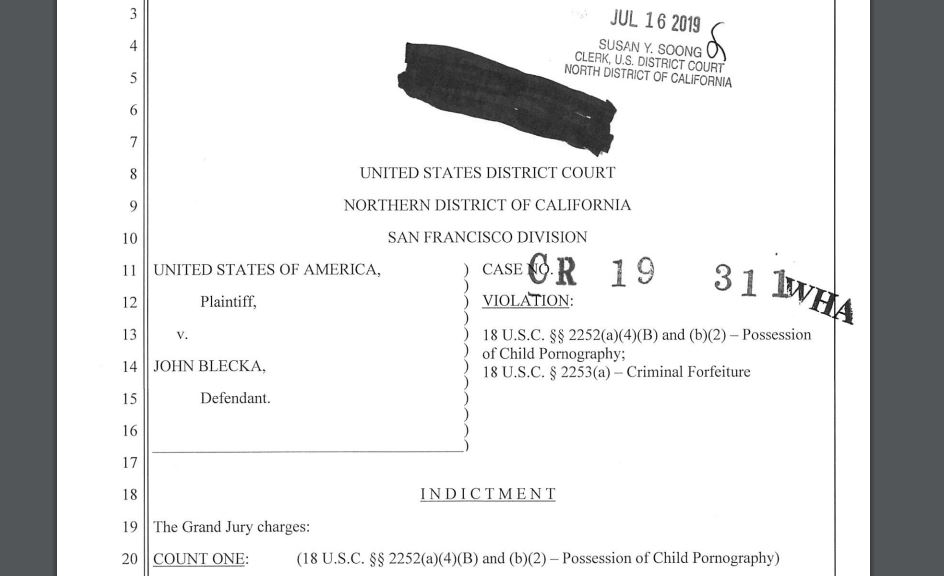 A federal grand jury has indicted a former Boy Scout volunteer in Marin on allegations of possessing child pornography.

John Cazier Blecka, 65, of San Rafael had material depicting “the use of a minor who had not attained 12 years of age engaging in sexually explicit conduct,” the indictment said.

The grand jury issued the indictment on Tuesday, and agents arrested Blecka ahead of an arraignment on Thursday in San Francisco. He pleaded not guilty.

A hearing was set for Friday afternoon to determine whether he should be released pending trial. A judge allowed his release on a $100,000 bond.

“Mr. Blecka has been a valuable and giving member of the community for decades as indicated by dozens of his friends and associates,” said defense attorney David Vogelstein, who is representing Blecka with Robert Casper Jr. “He will be judged on who he is.”

The indictment stems from a bust conducted in May by the Silicon Valley Internet Crimes Against Children Task Force. The task force, working with San Rafael police, targeted five residences in San Rafael and arrested two suspects, one of whom was Blecka.

Blecka was released on bail after his initial arrest. Federal investigators took up the case after that.

Investigators have released no information on the source of the pornography or whether the victim is a local child.

During a court appearance on Friday morning, federal prosecutor Ross Weingarten said Blecka could face up to 20 years in prison and a fine of $250,000 if convicted at trial.

Casper, the defense attorney, said the prosecution has already made a plea offer and that the defense will “seriously consider it.”

A status hearing is set for Sept. 3.

Michael Dybeck, chief executive of the Marin Council of the Boy Scouts of America, said Blecka “is no longer involved in scouting in any capacity.”

This behavior is reprehensible and runs counter to everything for which the Boy Scouts of America stands,” Dybeck said. “Upon learning of these reports from law enforcement we immediately removed this individual and prohibited him from any future participation in our programs. The safety and protection of children is the most important priority of the Boy Scouts of America.”

San Rafael police Lt. Dan Fink said, “We are concerned that there may be more victims out there … based on the case and his position of trust in the community.”